In 2015, two Hungarians invented Teqball. It is a mixture of soccer and tennis that has now also found its way to Germany. Berliners Eric Herbst and Jonathan Maurer are among the German pioneers of the sport. 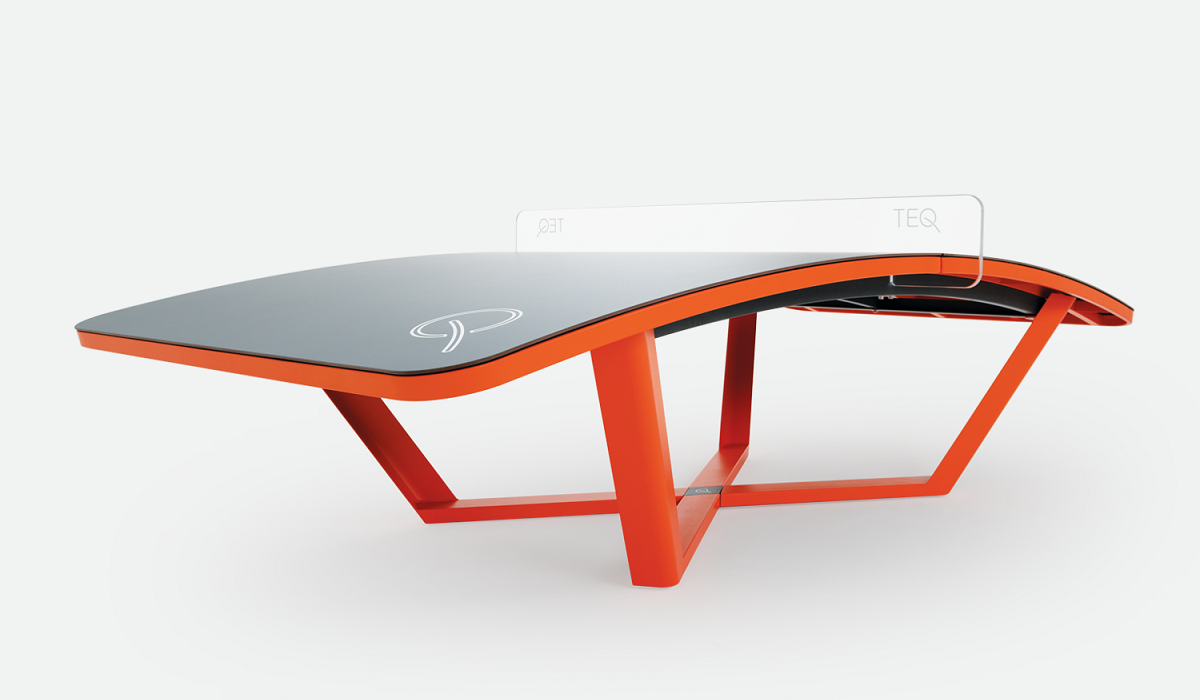 It's an impressive sight to behold when you enter Hangar 1 of the former Tempelhof Airport: although you won't find any aircraft there today, the huge space with its high ceiling, crisscrossed by numerous imposing steel girders, has remained. Spread throughout it: a tennis court, a soccer field, a basketball court and a kind of table that, at first glance, could easily be mistaken for a ping-pong table. But at the latest when Eric Herbst and Jonathan Maurer take their soccer ball to the table, which at second glance is visibly curved and slopes towards its ends, it becomes clear that it is not intended for classic table tennis. It is a teqball table.

What sounds a bit cryptic at first is a real trend sport. Invented in 2015 by two Hungarians, Teqball has now also arrived in the German soccer world. In a way, the sport is a mixture of soccer and table tennis. The goal is to play the ball onto the opponent's half of the plate in such a way that the opponent cannot get it back over the net with three contacts without the ball touching the ground first. Berliners Eric Herbst and Jonathan Maurer are among the German pioneers of the still young sport. Not only did they compete for Germany at the World Championships in Poland in December, but they also have big plans for the future - including founding an association in Berlin.

From Venice Beach to Berlin

The two students and soccer players from Berliner SC discovered the sport - rather by chance - during a trip to the USA together two years ago. "In Los Angeles, a lot of people met every Sunday at Venice Beach to play soccer," says Herbst, "and at some point we were introduced to Teqball. Herbst and Maurer liked the game, which they knew in a similar, less professional form from earlier days in the schoolyard, and were hooked. As soon as they returned to Germany, they looked for a chance to play here, too.

Watching the duo duel at the plate in the hangar, you can see how much fun they have playing. Technically adept and quick to react, they take the ball bouncing off the plate, put it on themselves, and then sometimes head it, sometimes shoot it back over the net. "You try to play the ball as high as you can with the first contact," Maurer explains. That buys time. "Personally, I enjoy the fact that you are very free in the game," says Herbst, "you can always come up with new combinations."

Creativity is important in teqball, as is good technique. Herbst says it helps, of course, if you bring an affinity for soccer and a certain technical foundation to the plate. However, it is by no means a criterion for exclusion: "We have already had the experience that people without soccer experience can learn Teqball relatively quickly," says Herbst.

Promoter of the sport

Herbst and Maurer have been playing Teqball with a wide variety of people since their trip to the USA two years ago. The duo has made it their goal to act as a kind of promoter of the new sport in this country, making as many people aware of it as possible. And indeed, the popularity of the still young game is growing in Germany as well. On the one hand, because more and more soccer clubs and players are using the plates, sometimes even incorporating them into their technique training as a new approach. On the other hand, because they have also found their way into sporting venues such as Hangar 1.

To ensure that the sport continues to grow in the future, Herbst and Maurer are planning to found a teqball association in Berlin. There is already a national association in more than 100 nations worldwide, but not yet in Germany. That is to change. "Especially in cooperation with club soccer, the sport would have the potential to grow in Germany," Herbst is certain.

Herbst and Maurer also see potential in themselves and with a view to their own, still young teqball careers. In December of last year, the duo already participated in their first World Championship - and were impressively shown what is possible with even more training at the plate. Eric Herbst recalls that they thought they had a "good chance" in the run-up to the tournament. A misjudgement, as it turned out. "The tricks, details and smashes that people hit at the World Championships were on a different level," says Herbst, adding, "We didn't have many chances there - not yet." He emphasizes the word "yet" emphatically.

At the World Cup, Maurer and he learned a lot about technique from the players from Hungary, the country where Teqball was born. They regularly dominate international tournaments, although the competition is also getting stronger. Serbia and Romania, but also Brazil are also strong playing nations, explains Maurer. Until Germany appears in this list, he and his buddy Herbst still have a bit of work ahead of them. Work on their own skills around the table tennis table of a somewhat different kind, but also in their role as promoters of the sport.

Try it now and buy a Teqball game plate

As the Official Fitness Service Provider of the European Championships Munich 2022, MATRIX will support the major multi-sport event from August 11 to 21, 2022.

News from the fitness industry HUR Germany cooperates with MINDZMOVE

The two companies HUR Germany and MINDZMOVE have entered into a cooperation at the sales level.

TRX filed for Chapter 11 bankruptcy on June 08, 2022 in the U.S. Bankruptcy Court for the Central District of California, Santa Ana Division, and is now seeking a buyer.

News from the fitness industry EGYM cooperates with Fisikal

EGYM will integrate the software applications of UK-based fitness tech company Fisikal into its own Branded Member app to better meet the needs of its multi-site customers.