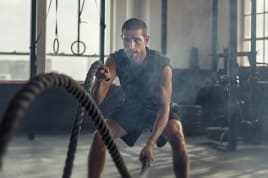 You are a manufacturer for Battle Rope? - Be the first in this category!
Brand: Anderer Hersteller
Price: Price on request
NewNürnberg, Germany
Price on request 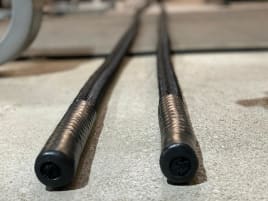 The training with battle ropes is a kind of functional training. You use a thick exercise rope that is up to 20 meters long and mounted on the wall or on the floor by the use of, for example, kettlebells. The training person grips both ends of the rope tightly and then starts creating alternating waves while maintaining tension. By using training ropes, you can especially train your upper body that is your trunk, arms and shoulders. It also promotes your endurance, heart and circulation and it is not only a good strength endurance training, but also prevents injuries and is applied in rehabilitation. Many German professional soccer clubs already use those fitness ropes for training. It also gets more and more popular in the fitness industry.

You want to try this effective training with battle ropes? Then buy a battle rope used or new on fitnessmarkt.com, the biggest online marketplace for new and used fitness and therapy equipment. You will surely find one among the workout ropes offered by traders, manufacturers or private persons. Take a look around! You can also find used battle ropes on our platform! Used equipment often is a good alternative to expensive accessions. After finding proper new or used battle ropes, you can directly get in touch with the seller of the new or used exercise ropes.

The latest news in the fitnessmarkt.com magazine

Due to Corona and growing competition, many operators have replaced long contract terms with monthly cancellable contracts and are selling...

Pilates in all its facets - that's what awaits participants at the "Pilates Conference" on March 11 in Karlsruhe. The IFAA's varied and ch...

General articles Visualisation - Why is it worth seeing your future club?

Based on the dimensions of the room/rooms, we prepare a visualisation with the division into 3d and 2d zones, an overhead projection, and ...

2023 has only just begun and fitbox is delighted to receive its first award. On the job evaluation platform "kununu", the franchisor was o...

The second Neuro Innovation Day on June 16 and 17, 2023, will focus on the diverse applications of neurocentric exercises in elite sports,...

New research suggests that targeted mid-body training may be the key to preventing and treating low back pain.A study published in the Int...

RSG Group launches HEIMAT by Waris Dirie, a fitness concept aimed exclusively at women. The first gym has opened in the heart of Paris.HEI...

From a legal perspective, it is not very easy to enforce a premium increase. The prerequisite is that the price adjustment clause in the g...

Due to rising prices, many fitness studios feel compelled to increase membership prices. How price-sensitive German members really are and...

Battle Rope in all cities