Bodystreet receives the 'German Fairness Award 2021': This is the sixth time that Bodystreet has received a very special award: In the award, which is presented annually by the German Institute for Service Quality (DISQ) together with n-tv, the franchise concept with EMS boutique studios receives top marks in the category 'Gyms' and lands among the top 3.

Customers and testers agree: Whoever trains at Bodystreet can be sure: Customer satisfaction and reliability are particularly important at the EMS provider! 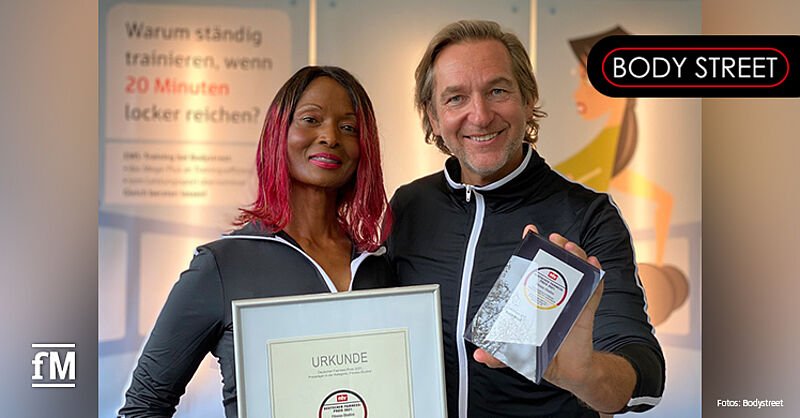 Fairness is rewarded by the customers

It is not without reason that the Munich franchise company has now received the 'German Fairness Award' for the sixth time - an award that results solely from customer ratings and can therefore be an optimal guide for all consumers.

This time, more than 63,500 customer votes in a large survey conducted by n-tv and the German Institute for Service Quality (DISQ) via an online panel decided which companies set standards in their conduct in a total of 61 categories and scored particularly well in the area of 'fairness'.

However, other aspects were also included in the evaluation. Respondents were given the option of stating their opinion on topics such as compliance with agreements, goodwill in the event of complaints, transparency of contracts and the absence of hidden costs and bait-and-switch offers.

Only one company was evaluated per category with which the participants had had contact or whose products they had used in the last twelve months.

"We are very proud to receive this important award for the sixth time. The German Fairness Award is particularly close to our hearts, as it results from the evaluations of our customers. And it proves: We deliver what we promise." Matthias H. Lehner, Managing Director and Founder of Bodystreet

Thank you very much for your rating! Rate this magazine article :
Related articles
News from the fitness industry New cooperation in the fitness gaming market

The two-time FIBO Innovation &amp; Trend Award winner, Sphery AG from Zurich, has been cooperating with YOUR SPACE GmbH, founded by Udo Münster and Katharina Osburg, since 1 October 2021.

News from the fitness industry Forbes names Johnson Health Tech. one of the world's best employers in 2021

Johnson Health Tech. the parent company of Matrix, has been named to Forbes World's Best Employers list for the second year in a row as one of the best global companies in the fitness industry.

News from the fitness industry Concept2 Holiday Challenge: Collect kilometres and do good until Christmas

Whether rowing, cross-country skiing or cycling - cover as many kilometres as possible on the RowErg, BikeErg or SkiErg

Life Fitness appoints Paul Stoneham as its new CEO to kick off the company's next phase of growth.

The interface between InBody and mobee® 360 now enables a connection between the BIA measurements and the platform for digital diagnostics.

The previous showrooms were bursting at the seams. A new one was needed to do justice to the current portfolio.